This is what I drew yesterday...bit of a sketch, but I could make it look nice later I suppose.

So here's the story. Virginia the Christian Rocker was questing throughout Neo-Europe for the fabled Holy Axe of Ages guitar. Virginia believed possessing the Axe was the last step in her journey to become the greatest Christian Rock Goddess in history.

Her quest finally brought her to a seemingly abandoned mountaintop castle, wherein she found the ancient relic lodged in a pedestal made of pure rock candy. Impetuously, Virginia pulled the Guitar from its resting place, and unwittingly broke the seal that had been keeping the vampire, Count Von Der Zucker captive for a thousand years.

With the Count and his pet zombie dragon Blutrünstig now running free throughout Neo-Europe, it's Virginia's divine obligation to banish them once again to Candy Hell. 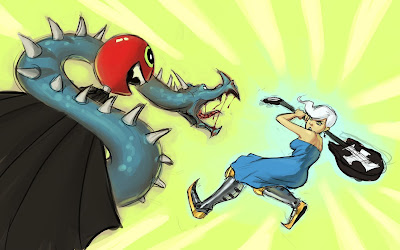